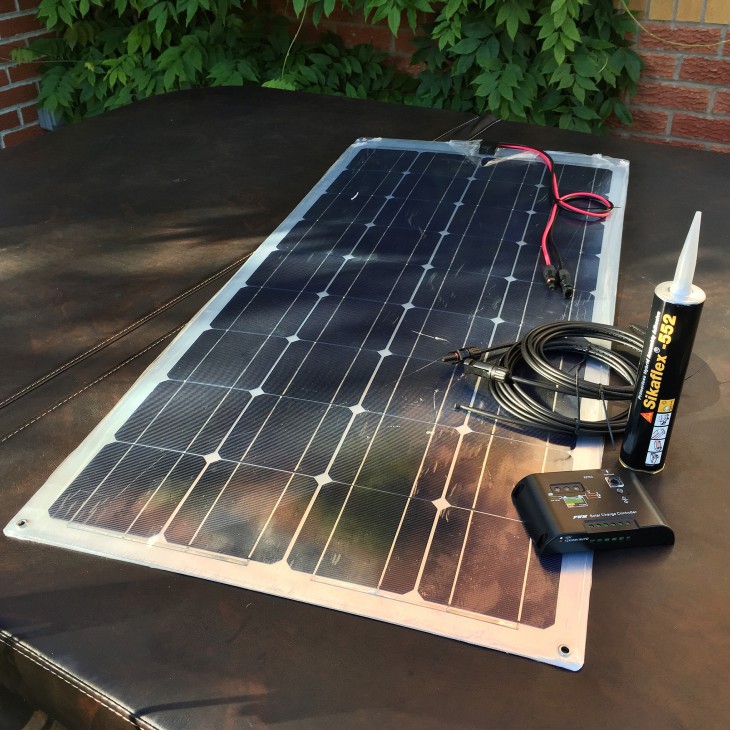 I’ve been running a rigid frame 50W solar panel at home for a number of years to provide 12V lighting with the intention of using it on the caravan and then the campervan but I just couldn’t bring myself to mount such a big frame on the roof of a moving vehicle. After noticing a deal over at BestEcoShop for a Biard 100W Semi Flexible Solar Panel Kit I thought now would be a good opportunity to finally perform a campervan solar panel installation.

The main reason I want solar energy is to keep the fridge running for longer when the van is static over a day/night. The leisure battery is charged by the engine (alternator) while running but unless we book a campsite with an electric hookup it’s not long before the fridge drains the power of the small 70Ah leisure battery. The specially designed 12V Intel B fridge is stated to run at an average of 13W per hour which is dependent on factors such as it’s thermal load (the amount of beer in it) and the ambient temperature so the first thing I did was work out the power required.

… In electrical terms, power (measured in watts, W) equals current (in amps, A) multiplied by voltage (in volts, V). Your battery produces roughly 12V to power your equipment, so to work out the drain on your battery from an appliance, take its power rating and divide by 12 … (see here)

So the ‘theory’ is good, in 24 hours the fridge will take 30Ah and in 24 hours the campervan solar panel could provide 30Ah if I get 6 hours of daylight. When I don’t get 6 hours of daylight the alternator will be topping up the leisure battery via the split charge relay when driving and when the vehicle is stationary I have 110Ah stored in the battery. However, in practice when it’s raining and cloudy I could run out of power before my 6 pack is chilled 😉 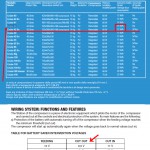 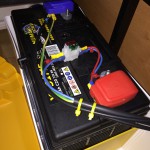 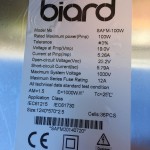 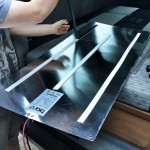 The above shows the Indel B CRUISE 42 fridge specifications and the new leisure battery I’ve fitted with extra in-line fuses. The Biard Solar panel is mounted on aluminium and is flexible up to 30 degrees. I added 3mm double sided foam tape to take up the slack between the ridges of the campervan’s pop top roof to minimise any bouncing. 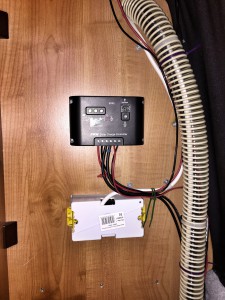 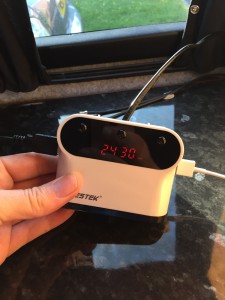 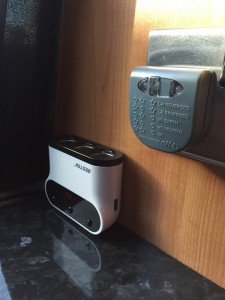 The solar charge controller is a basic PWM 10A controller, it’s actually just the same as the one I purchased in 2011 so I’m pretty happy with the way it works. I’ve connected it direct to the leisure battery (via a fuse) rather than through the PMS and I’m running an auxiliary 12V socket from the output to supply a few low power items independently of the main system. The controller has a few modes which can be used to detect daylight (through the panel) and can switch lighting on and off or on a timed schedule. I mounted it onto the inside of the wardrobe as I don’t need to monitor the display  and it ain’t that pretty.

The auxiliary 12V split socket also has a voltmeter that displays the condition of the battery and also the power being used via it’s two USB slots. It was just over a tenner on Amazon … 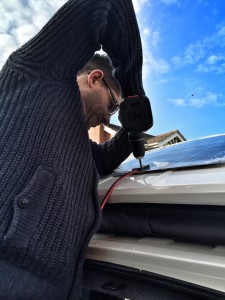 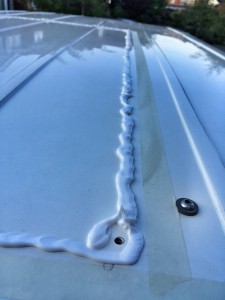 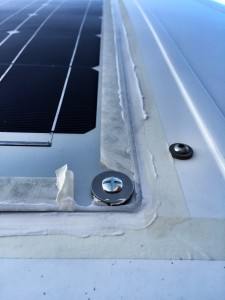 Although I purchased some Sikaflex to glue the panel to the roof I changed my mind and decided to use the corner mounting holes. I’ve used external weatherproof silicone to create a water tight and wind tight seal but should I need to remove the panel for any reason then it should come off fairly easily after removing the bolts from the inside. Plus I’m happy that the panel isn’t going to shift at speed on the motorway. 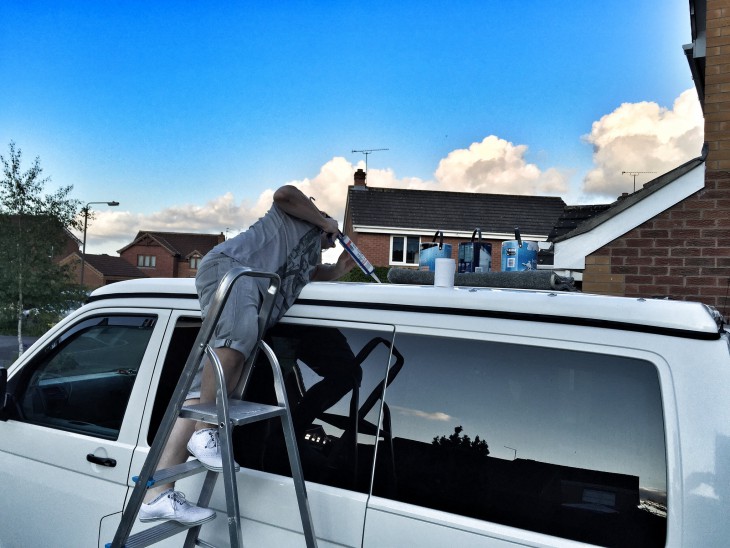 I asked my mate @MartinAedy to do all of the ladder work due to me still recovering from a complete hip replacement and I didn’t want to risk anything! 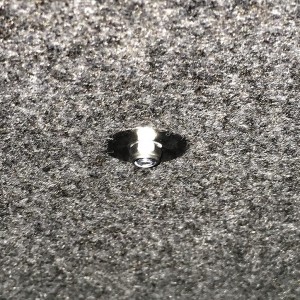 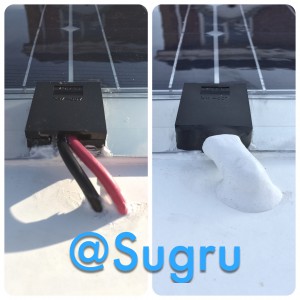 Inside the pop top the stainless steel fixing bolts and washers aren’t going to cause any issues but I may add a little dome of Sugru to the nut head. I’ve also used Sugru on the cables as they enter the roof (over silicone). These are massive 4mm cables running a total of under 6A so I feel there should be no restriction of current using Sugru on these. The cable holes are off centre to avoid existing internal lighting cables. I used M5 20mm roofing bolts and A2 stainless steel M5 Penny Washers and SS Nylon Lock Nuts. 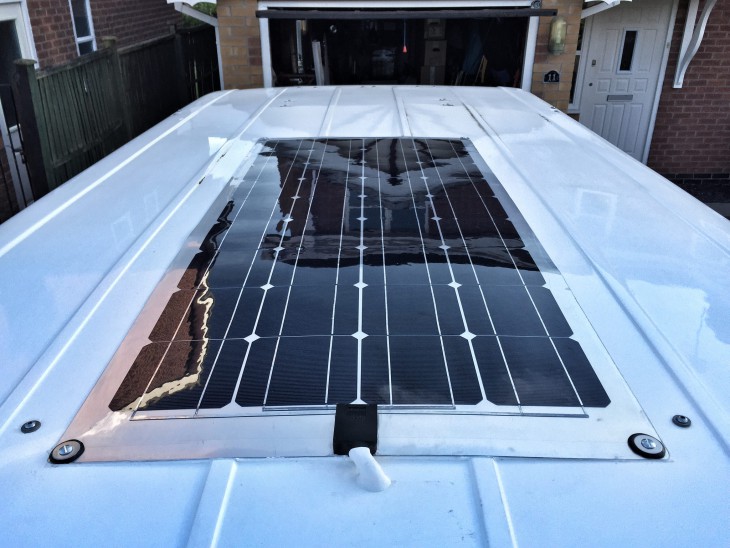 I’m really pleased with the result. From the ground you can’t really see any indication of a campervan solar panel installation and it’s not going to effect the height restrictions of car parks with height barriers. The solar controller has battery management built into the software and can condition the Leisure battery much better than the alternator does, I’ve already noticed the leisure battery display a much more complete charge level. 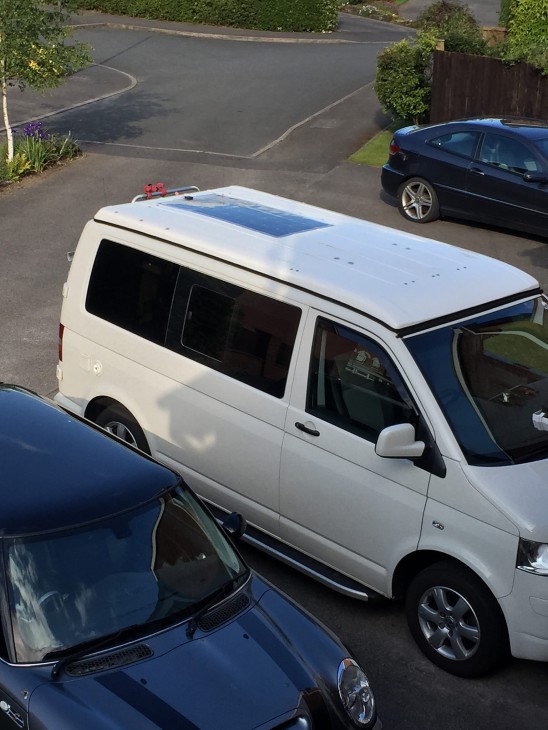 I guess only time will tell how well this 100W solar panel is going to cope with our demands and I’ll update this post once it’s been fully tested under load.

Disclaimer: I’m not an auto electrician and don’t suggest you follow what I’ve done here unless you use the correct size cables and fuses for your installation. I’ve used 17amp auto cable with 10amp fuses where I’ve needed to extend from the cabling provided in the kit. Also, don’t ever lick battery terminals.

UPDATE August 2015: We’ve just returned from two weeks away with the campervan. For the first week the van sat in a carpark and wasn’t driven, the ‘full’ fridge stayed at a constant temperature and the battery hardly ever dropped below 100% capacity in the day! Even in heavy cloud and rain the panel seemed to be powering the fridge without touching the battery and then the battery would take over at night. The second week we used LED lighting and even 12 volt hair straighteners (well my wife did) and the battery was always full by the end of the day.

I’ve started a Pinterest board called 12 Volt Living and aim to keep it updated with products that help with a 12v power supply.

UPDATE April 2017: Well, the panel fitted failed. I contacted the company and they sent a new panel free of charge. This is great service from the company but it still meant I had to remove the old panel. It came off easily with just the silicone being used – If I had glued it, it would of removed all of the roof paint. The silicone is a pain to remove by carefully using a Stanley blade, but can be done with a little bit of time and care.

Before I re-fit the new panel I’m investigating adding an air gap between the panel and roof by using strips of aluminium cross section that would allow bolts to be re-positioned along the bars. I found that the new panel had the holes in different places so I can’t just re-bolt it on. Here are a few pictures of the panel after removal. It looks like the roof got very hot in points.